It has always been our aim and dream to retire from our mainstream careers and open a kennels – we are finally realising this ambition in the fabulous climate of Spain. Mandy and I have always had dogs in our lives and up until recently we had 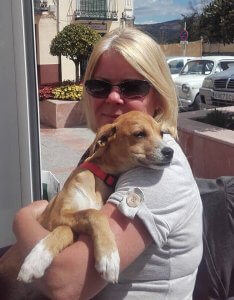 three bitches, Rosie, Chloe, and Kiera. Rosie and Chloe are Golden Retrievers although Chloe is cream! The baby of the family is Kiera who is an English Springer Spaniel that we rescued. She had an incredibly cruel start to life and it took us a long time to gain her trust and whilst she is still nervous of people she doesn’t know, she is a bundle of fun and adores playing with other dogs.

Unfortunately, Rosie was taken ill before we flew out to Spain in June 2015 with a view to buying Wagtails and soon afterwards, Rosie went to sleep for the last time. The kennels have been re-named Rosie’s Retreat in her memory as she was the most wonderful dog and is still sadly missed.

Since moving to Spain in October 2015 we have become involved with fund-raising activities for two animal rescue charities and, not surprisingly, adopted two more dogs – Honey, a female Mastin cross who was abandoned by our front gates and Becks, a Spaniel-mix who had been found stuck in a storm drain as a small puppy.

I am a qualified Veterinary Assistant and Mandy has completed a course in Animal Psychology in preparation for our new venture. It is my intention to also study further and open a Canine Hydrotherapy pool in Spain as we have seen first-hand with Chloe how this can help rehabilitate dogs after surgery, as well as being of benefit to dogs that have trouble exercising or are overweight.

But most importantly, we love animals and will do whatever we can to make your pets’ experience at Rosie’s Retreat a happy and enjoyable one.

We use cookies to ensure that we give you the best experience on our website. If you continue to use this site we will assume that you are happy with it.Ok